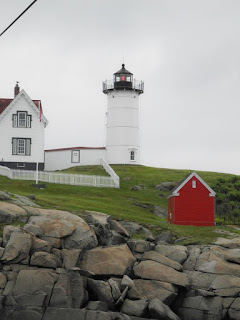 The Nubble Light Challenge is in the books and I'm happy to report it was drama free which in turn makes for a very boring recap so I will be brief in saying, it went swimmingly. My biggest concern was the water temperature but I did not fixate on it days prior. What would be, would be. I didn't even want to know race morning. I would be well prepared wearing my full suit, 2 swim caps, silicone ear plugs and slathering my exposed skin on my face and neck with vasoline. I caught wind of a conversation while suiting up that the water temperature race morning was a balmy sixty something. I'm thinking 62ish but I can't confirm this. I could NOT BELIEVE it.  Three to four foot swells were non existent and  no 48 degree currents out by the Lighthouse. We had approximately 10  buoys for sighting as apposed to 4 scant buoys last year.


I exited the water smiling with everything intact  including a 13 minute PR from last year and wondered how it was possible that there was no suffering to be had.  I guess I did that all with my non-wetsuit cold water swims prior to the event and once again, Mother Nature pulled a fast one on me. Better safe than sorry though right? As happy as i was with a good swim, I got NAILED in the results. Yikes! 19 women were faster than I and two were in there 50's. This was no pool of triathletes by any means. Pure swimmers and good one's at that!  I was hoping for a 1:10 but I'll take the 74 minutes with the PR for that course.
Many thanks to *Team Trigirlpink* as I've affectionately named us. First  my sweet
sister Paula: picture taker, land support, coffee supplier. 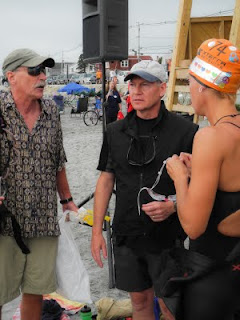 Rick Barrie :  Kittery Maine native, master swim kayak escort for 2010 who instead came to support my newest kayak escort with logistics in and out of the water for 2011, and took some great photos( on the way) 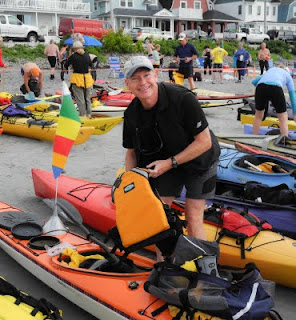 Mike Boyko :from Ware NH: My 2011 kayak escort  extraordinaire who accompanied me MINUS 4 foot swells, frigid water and a chance to save another swimmer. Sorry Mike!
My dad: who was waiting for me at the finish like last year happy his youngest daughter wasn't a  blue raspberry looking Popsicle.

Wow was Lynne Cox there? sounds as if there were a few LC's there! You rock, that is such a great challenge and you kicked its butt! Good work:) but the question remains...was it as satisfying as the B2B and the beer at the finish:)! haha

Don't you hate it when you race with single sport athletes?!

Always puts us slow(er) triathletes in our place....

Thinking about doing this next year. I've just gotta get working on putting together a big support crew.

AWESOME! HUGE PR - wow! And, I know you enjoyed some nice beverages afterwards - even if it was hot chocolate. LOL :) HOW FUN!