Tuck no handers and one footed x-ups Slope Side! 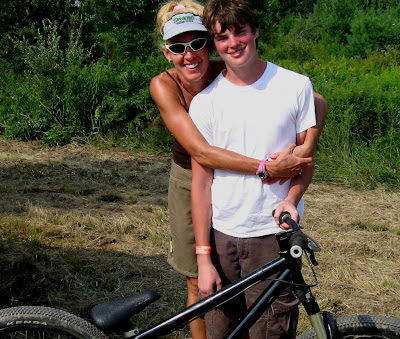 Phew... another crazy week has come and gone. I've had no time for blogging. The "elders" as my brother likes to call them, were here visiting and back to Florida they went this morning after 8 days with me. I have to admit, it was nice having meals ready and laundry done (thanks mumzy) after working all day with a bonus heavy 20 hour training week Jen tossed into the mix. Noooo problem. I got very creative and even managed to not abort one scheduled workout which included a commute ride into work (25 miles one way) and home while it piss poured on me both ways last Thursday. Can I just tell you how fun it is to put on sopping wet cycling clothing to ride back home in? ICK.


This past weekend was all about my 16 year old gnarly nephew, Andrew. I got to see some pretty cool slope side freestyle mountain bike action at a competition he was in up in Tilton New Hampshire. Crazy stuff. I decided not to miss a scheduled ride so pedaled up from my sister's house in Eliot Maine to Tilton while she drove up. At one point I even found myself on the Timberman Bike course not realizing how close
Tilton was to Gilford NH.
Andrew was in the amateur competition with 33 riders. He walked away with 3rd place and some serious Shwag. Sram bike parts to name a few.
Tuck no handers, 360s, tire grabs, toboggans, and one footed x-ups, just a few tricks in his arsenal coupled with some seriously smoooooth riding finesse earned him his awesome placing.
One thing I learned, you don't want to be known as a "hucker" Lacking style, and just muscling your way down the mountain. Sooo not Andrew. Everything is calulated
and well thought out before every run. Nice job A!!!!! Aunt TGP is soooo proud of you! 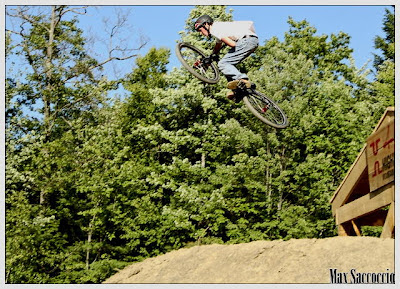 A on the Shred Shed 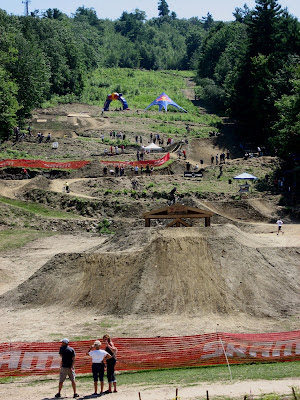 MR. TGP, Sister Paula and Mom at the base of Highland Mountain's Freestyle terrain park
Posted by Trigirlpink at Sunday, July 27, 2008 8 comments
Email ThisBlogThis!Share to TwitterShare to FacebookShare to Pinterest

Greetings fellow blog mates and lurkers!
Thank you for your private emails , cards in the mail, and blog messages about my Gram. Very thoughtful and much appreciated.

FACTOID: It's mid July.
WHAT???? I HATE THAT. Why? Because August is right around the corner
and here in New England anyway, the days start to get shorter and we get less days of sticky, hot and humid summery days and well, it just starts to feel like early fall is starting to push in if ever so subtlety

PARTIAL FICTION: I'm signing up for LP for sure come Monday morning.(This changes hourly mind you) I want to endure another season of IM training and suffering which tends to injure the crap out of me
before I can toe the damn line.

FUN FIND:
Bree Wee gets the credit on this one but you know how you just randomly check out other people's blog favorites and you find a cool one?
I'm thinkin' this must be some chick that models in Hawaii and eats raw meat. LOL.
Wrong-o. Anthony is a successful model based in Manhattan and is a hard core raw foods eater. Lets just say Cheez-Its or Diet Coke don't have a fighting chance in his shopping cart. His blog is quite interesting. It motivates me to take teeny tiny steps and eliminate needless crap in my diet in hopes it gives me more energy for workouts and just daily life.
Ok!... I admit it!!!! Anthony is a bit of eye candy too so it will be fun to see what new ad campaigns and tear sheets he's aquired.... like this one... 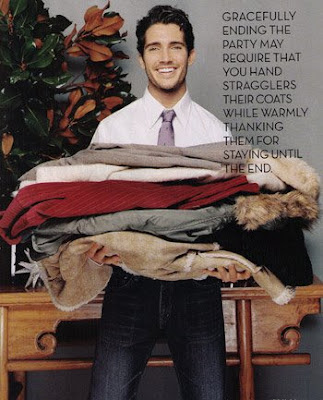 Have a great weekend and best to all who are racing.
Posted by Trigirlpink at Thursday, July 17, 2008 8 comments
Email ThisBlogThis!Share to TwitterShare to FacebookShare to Pinterest 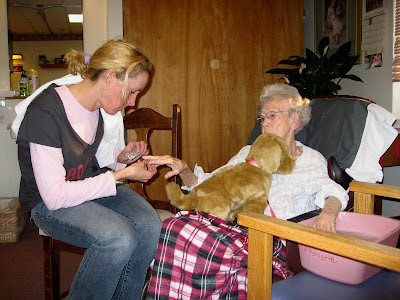 Posted by Trigirlpink at Monday, July 14, 2008 8 comments
Email ThisBlogThis!Share to TwitterShare to FacebookShare to Pinterest 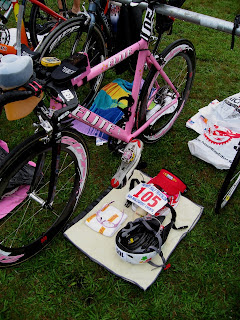 Everything is measured to ensure proper linear set up, note all corners of towel meeting,glasses spit shined, gel flask perfectly balanced against running shoes.BTW.. all planets must be aligned whenever I race too. :-)


Ok, lets start by saying this was NOT a competitive race. Patriot Man is in
it's second year and this year was A BEAR for them to fill. Why? Because NA Sports dumped RI 70.3 the weekend following this race. Anything with an M-DOT attached is going to crush the local race directors struggling to make options available so that we as triathletes are not slaves to the current giant in the triathlon world of Ironman and 70.3. Trust me, I debated whether to do RI or this and honestly, Florida 70.3 ran smooth as butta but the better of me said, go with Patriot. When asked on the application why I chose Patriot Man, I stated, "to support the local race directors" Minutes later, I got a personal email from the race director who said, "Bless You"
Pretty funny...


Wave one Elites (just a handful, which included only 4 women)
Wave two: Men 50 and over
Wave three: Women 40 and over
4 more waves after me

Pretty much a standard swim with nothing worth mentioning. I was hoping for some fast feet to latch on to. None to be found. I led the pack entire way and no one latched on to me that I could tell
29:58

Exiting the water, I was 3rd female I was told entering transition.I guess I must have caught 2 of the women in
Elite wave.

Bike:
I found It thanks to my way cool watermelon mylar dancing around on the rack signaling me to GET OVER HERE!! Off I went feeling kinda lousy until mile 7 and things started to come together but just as things started to come together, the DREADED happened! YES!!! IT DID!!!!
KABOOOM! At mile 24.9/ 1:17 minutes into my ride, my rear tubular flatted.
The color must have drained from my face. I was all alone and all I could think was, YOU ARE DOOOOOOOOMED YOUR DAY IS DONE!
Snap out of it, I said. YOU CAN DO THIS! So ... I did.
4 minutes later. wheel off, tire off, spare on, air in. wheel back on. Don't pull a Bree and make sure brakes are not rubbing (hehe) OFF I WENT!
Back in the game! I was even more focused now to try and make up time.
I passed 2 Elite wave women on my second loop and my friend PUREMADNESSWEAR.COM Jen, (little plug) was the only woman out front. Well I knew I couldn't catch her. We train together on the bike and I knew it would be impossible. I was happy happy happy though cause I kept my head on straight and changed that damn tire QUICK and
didn't let it ruin my day!! Bike 58.3 miles 2:51

T2
HELLLLOOOOOOO WATERMELON MYLAR! I SEE YOU and I am going to have a FAST FAST transition so Jen can't yell at me!!! Woooo Hoooooo!!! Off I went still second woman overall with ooooops NO SOCKS ON. What was I thinking? They were right there, in my shoes. I was a lazy a$$ and didn't want to take the time to put them on. I knew Sarah Keller was a FAST FAST runner and even though I passed her on the bike and re-passed her after my flat, she was gonna mow me down on that run. My goal was to see how long I could hold her off.
6 miles and BAM! there she was like a gazelle, wizbanging by me.
Then the other elite female got me at mile 10 WAAAAHHHHHHHH!
and then a relay girl and one other. My run was subpar with a 1:49. ICK! I needed a 1:44 to be happy and I was running as FAST as my legs would allow but I am still playing catch up with my run fitness, physically and mentally and I will FIX this before Timberpaloosa because I am DAMN tired of hanging on by my fingernails and feeling depleted instead of in control when it comes time to tie up those running shoes.
Maybe I should get some shock therapy? HA!!
5:14
So here i sit, with oosing blistered feet and happy to have raced a great course with great people and most importantly, NEVER will I have the fear of flatting again and if I can change a tubular snappy and efficiently, SO CAN YOU!
Then when you get out on the run course and you (hopefully) pass some guys that zoomed by watching you change your flat, and THEN say.. "Hey, wasn't that you on the bike course that flatted and now your passing me?" You can say, Yup! SEE YOU AT THE FINISH!!!!!!!! 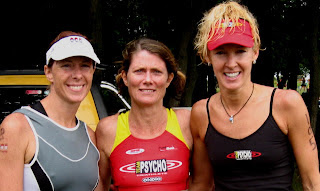 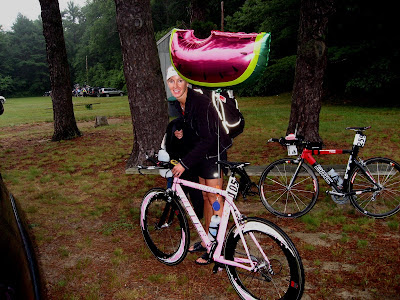 Posted by Trigirlpink at Saturday, July 05, 2008 8 comments
Email ThisBlogThis!Share to TwitterShare to FacebookShare to Pinterest 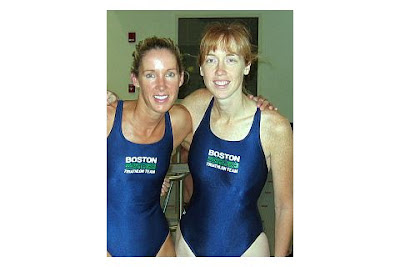 This is my friend Maggie( we both used to be on BTT) who I went to visit today after having hand surgery yesterday to repair damaged nerves and tendons from a thumb she almost left on the kitchen counter and who is also signed up for Lake Placid. Uh oh, is right. The only thing she'll be doing July 20th is ringin' a cow bell.

Maggs...if you REEEEEALY didn't want to do LP, you could have just said so and not
cut of an appendage!

I am signed up for a 1/2 ironman on Saturday so wish me luck in finding my bike rack
in T2. Duh...

Happy Happy safe training, racing and travels for the 4th!
Posted by Trigirlpink at Thursday, July 03, 2008 5 comments
Email ThisBlogThis!Share to TwitterShare to FacebookShare to Pinterest