Before we get started,  a sincere thank you must go to Rachel Ross and her run coaching, Runspo for helping me make the transition from a run/walking shuffle to miraculously getting me to the point in which I could run again. Not only did I need help getting my a$$ in gear  but  at the same time, I needed someone to babysit me so that I didn't  binge-run and wind up injured again.  Goal complete.

I have not run consistently in over a year.  After taking a break in 2012 to focus on cycling, I inconveniently tore my knee and added 9 more months to the total. I weighed 151 pounds in January after ACL reconstruction.  I struggled with this the most  and I've spent  a good part of 8 months slowly chipping away at regaining some sense of well being physically as well as mentally. It's been a really long haul to say the least and arduous at that but it's over now and far behind me. If you know anything about me, one of my major flaws is my lack of being* in the moment* and taking one task at a time. My mantra which usually works against me : I want it all back and I want it all right now.  It took much self discipline and self control over the last 8 months, but I did it. Goal complete. And a huge one at that.

When my patience and consistency started to reward me, I decided it might be fun to have an obtainable goal to motivate me further  so I signed up for 4 sprint triathlons for the end of August into September.  My orthopedic warned me back in April that I most likely would experience front of the knee pain when attempting to run as my knee was still healing and to not expect much. Participating would be a good start.  Rachel worked with what I had : No run base coupled with a high risk for getting myself injured.  I signed up for the 4 races and set my expectation bar so low you wouldn't have gotten your big toe under it.  My first prize was the absence of any front of the knee pain. Thankful, I continued and followed the run plan.  Goal complete.

This past weekend closed out  the last of the 4 races I signed up for. It's still  hard to digest that I used to love  and respond  "1/2  ironman" without hesitation when asked what my favorite distance of triathlon was. It's all foreign to me now.  A sprint was now something I wondered if I could finish without blowing up by the run and walking and I did it.  Goal complete.

I managed 2 age group wins and 2 second place age group finishes in my little local New England sprints I picked. This was way more than I hoped for or expected from myself.  Goal complete with a bonus Price Is Right - Spin The Big Wheel without going over.

I ticked  the last box on Sunday with one last race but not without some drama. A heavy rain cancelled the ocean swim portion of our race.  I'd be lying if I  said i was fine with that.  Instead I threw a mini hissy fit while I sat in my car listening to the announcement.  WHAAAAAT???  There's no thunder, there's no lightening!!  I drove for an 1:20  only to have my favorite and strongest discipline at the moment snatched away and my weakest  being two legs of the race now???   I tried to quickly let it go and did some SERIOUS attitude adjustment on the fly after a phone call or two to quiet me down.  I had no control over this. Besides  I wasn't the only one affected.  Instead, I  adjusted my goal along with my attitude and went to Plan B:  I  would cross that finish line leaving nothing out there. Having the swim taken away, I would not get that tiny advantage out of the water and the runners would prevail. I accepted this and got out from the warm and dry cocoon of my car to do a long run warm up.

As we (the last  of 6 waves)  finally got started, I  watched while 4-5 women took off ahead of me for the 1.5 mile run  leaving me in their wake.  Even though I warmed up thoroughly, I had a hard time staying warmed up waiting for our wave. Even with a good warn up,It was a shock to my body and I just had to settle in and maintain a pace I could handle for 1.5 miles and forget what was going on further than my own feet.  I didn't start my watch, I just put my head down and focused on good form and going hard but not so hard I'd tip the scale.  8:48 pace the results show. Seriously??  HORRIBLE.  How could I feel like I was gonna throw up and it be an 8:48 pace?
After slipping into transition feeling like I ran a 6:45 minute mile, I rolled out praying someone wouldn't take me down with the wet conditions.  My legs were like quick set cement after my 6:45 minute mile fantasy pace run. my legs were also confused because my arms were supposed to be doing their share of work before getting on my bike.  Ooooof.

I caught myself 2 or 3 times thinking about the run that loomed over me during my 14 mile TT  as if I had to run 26.2 miles.  I even allowed my sensible self to contemplate racking my bike in transition  and forgetting about that little 3.1 part but then I regained composure only because the thought of how my dad was going to appear in front of me showing his disappointment and then would have to go to the Elks Lodge later to watch the Patriots game with his buddies all the while  telling them his daughter was a quitter.
14.5 miles/ 20.7 mph   42:58 and that part was over. Goal Completed.

I racked my bike with a 39.9 transition  and If someone had waved one of those giant  bags of swedish fish in front of me to grab on exiting T2, I'd a betcha I could have shaved off another 5 seconds.

Zoom Zoom ...off I went thinking about the pancakes I was gonna have when I finished as my reward for going -Throw Up Mode- the entire race. I ran. I ran as hard as I could. This time I managed a 7:51 pace. I wanted to end this little race on a good note and all I needed to do was put forth my best effort. Nothing more.
I crossed the finish line and looked for my dad.  Another goal attained. And the best part?  My dad didn't have to show up at the Elks later that day telling his Benevolent and Protective order of Elk  brethren  his #2 daughter was a quitter after all. The best goal of all! 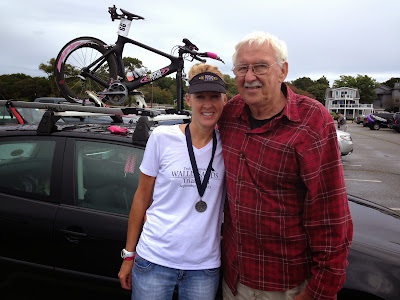 Thanks for checking in!

Posted by Trigirlpink at Monday, September 23, 2013 1 comments
Email ThisBlogThis!Share to TwitterShare to FacebookShare to Pinterest