tagged with a heart rate of 171-180 that I will be averaging, and some serious thigh burn. This along with the very odd feeling of having 30+ pairs of eyes fixated on wattage numbers on the jumbotron size screen set up in front of a semi circle of cyclists on Computrainers gutting it out in a range of anywhere from 23-30 minutes. The annual Team Psycho Indoor Time Trial will be held this coming Saturday. It will showcase 8-9 heats of cyclists creating puddles of sweat and some serious suffering for 9K.
This year, I'll be in heat eight. I did not choose to be placed in this heat, it's just where Dave put me. Maybe he put me here for a reason. I'm thinking it's because it's exciting to watch a gutted cow thrown over the fence at feeding time at the zoo?
The heat I'm in is fondly called "The Hottie Heat". Frankly, I do not belong in this heat. I'm far from *Hottie* material and every other woman in this heat will be chewing me up in micron bits and tossing my pathetic wattage sorry ass right out window like confetti for a ticker tape parade.

All in all, it's a fun social get together with good music, beer and a chance to catch up with teammates and friends.
Besides that, it's no more than 30 minutes of humiliation (for some) and then everyone forgets anyway.


1
Anna Stauss (is faster then me)

4
Micha Ramsey (Micha is a pure powerhouse on the bike)

6
Robin Sheedy (Let's see.. Robin ain't no slouch herself. I'm hoping as a busy
attorney this has kept her too occupied to get on her bike lately and thus I have a chance to stay within reach)
7
Alicia Kaye (Do you think Olympic bound Jarrod Shoemaker would have a wallflower
as a significant other? See #3)


8
Caitlin Shea-Kenney (This is just ridiculous. Let's just have a Pro party in heat
8, shall we?)


After much thought over this, I've realized the pressure is really off of me. All eyes will be on the big guns. Dede's got the target on her back after winning last season. Wish me luck or more like an intact Psyche!
Posted by Trigirlpink at Tuesday, January 29, 2008 7 comments
Email ThisBlogThis!Share to TwitterShare to FacebookShare to Pinterest 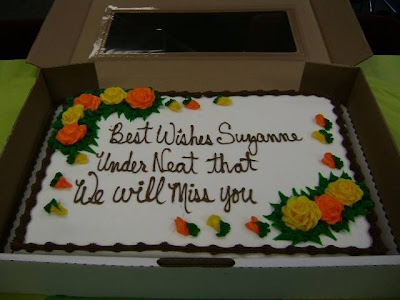 In honor of the cake eating I will be partaking in this weekend in celebration of my nephew's 16th birthday, here's an email I got today that made me want to pee my pants...

Okay so this is how I imagine the conversation went:

Walmart Employee: 'Hello 'dis Walmarts, how can I help you?'

Customer: 'Yes, I would like to order a cake for a going away party this week.'

Customer: 'Best Wishes Suzanne.' And underneath that 'We will miss you'.
Posted by Trigirlpink at Friday, January 25, 2008 3 comments
Email ThisBlogThis!Share to TwitterShare to FacebookShare to Pinterest

I Have Nothing To Blog

And I'm sure you are all tired of looking at my Splish suits so I think I'll just ramble on about nothing.

It's January and it's stacked up as the worst month of the year followed by February in my book. I'm pasty white and I want to sleep and eat macaronni and cheese and brownies.
So help me god.....If I see the Bill Clinton clip of him falling asleep at a MLK day speech one more time, I'm going to burst a vein. Good God people! Like you've NEVER dosed off in your life! I do practically once a week behind the wheel! (just kidding)

I have a big fat zero for a place nailed down to stay in Idaho for IM CDA and I don't care. If I have to sleep under a tarp with my bike holding it up, I will. I refuse to shell out $1200 that is NON-REFUNDABLE at a Holiday Inn in Coeur D'Alene and risk getting seriously injured and losing my race fee, my plane fare and my hotel.

My legs are still trashed from a long run I did on Sunday and I don't understand why. I've done the same run 3 weekends in a row and have only added on 1.2-2 miles each time. The last 2 long runs (before this weekend) I did not suffer from delayed onset muscle whatever you call it, I carried a water/poweraid mix and tried to keep hydrated until my water bottle froze,I ate within a 1/2 hour of finishing and stretched... why this week?

I tried out my friend pro triathlete Dede's Guru Chrono last week to possibly buy. To my surprise, it fit me well and it felt very close to my set up on my Elite T-Class but it's got lots of bells and whistles I don't need or care so much about and I would have to send the red frame back to get it painted pink because.. well I'm Trigirl Pink and a red bike with 808's swirlin' around with pink decals would just clash terribly. Brian at FastSplits is checking into a new Guru Chrono for me. Could someone have a little chat with Paul and ask him things like, "your not gonna make Elaine ride that 4 year old(almost 5) aluminum Elite T-Class training for IM CDA, are you? She really needs a carbon frame. It's time. Let her get one. She will be crippled riding that unforgiving rigid aluminum frame. Why do you want her to suffer like that?"
Feel free to use your own dialogue and creative hints.
Posted by Trigirlpink at Tuesday, January 22, 2008 5 comments
Email ThisBlogThis!Share to TwitterShare to FacebookShare to Pinterest

Posted by Trigirlpink at Friday, January 11, 2008 4 comments
Email ThisBlogThis!Share to TwitterShare to FacebookShare to Pinterest 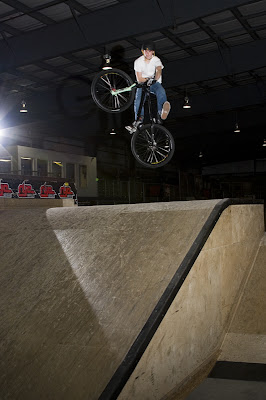 Better than 94, huh? This would be my cute little nephew. We have one thing in common. We both like bikes. The difference is, my ass is firmly planted on my saddle 99.9% of the time while his is airborne. Kid never has to worry about chafing from riding on the nose of a saddle for 4+ hours in a thin speedo munching Cliff Bloks.
Posted by Trigirlpink at Tuesday, January 08, 2008 2 comments
Email ThisBlogThis!Share to TwitterShare to FacebookShare to Pinterest

Saturday, I was about to hop on my Computrainer in a room which faces toward the back of my house. Our property is partially wetlands and abuts conservation land as well. As a hobby, I enjoy feeding the birds year round. Occasionally we might see a deer or two but very rarely.
As I was about to get on the trainer, I happened to glance out back and here's what I saw. 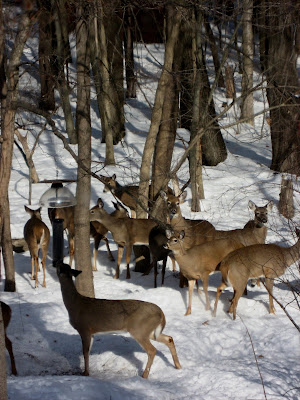 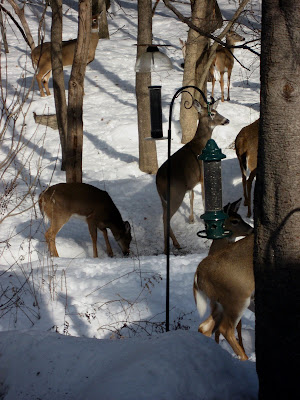 After a quick count I tallied up approximately 30 deer. It's been a very snowy New England winter thus far and as the picture shows, the deer are hungry. I wanted to run out carrying my refrigerator crisper bin and dump it for them after watching a few of them try unsuccessfully to nibble from the 2 seed feeders I have hanging.
After a trip to Lowes later that day, I bought a huge bag of seed without the shells and dumped it in a bucket and brought it further out in the woods for them. We are expecting a few warm days ahead so hopefully the ground cover will reappear soon for them to find food.
What a rough life being a deer...

I hope everyone is excited for the upcoming season and starting off 2008 with some solid training!
Posted by Trigirlpink at Sunday, January 06, 2008 4 comments
Email ThisBlogThis!Share to TwitterShare to FacebookShare to Pinterest