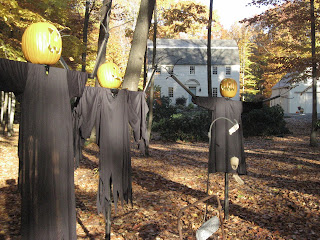 
I'm up in Maine this weekend visiting my sister and celebrating my grandfather's 95th birthday tomorrow.
November 1st means 2 things:
1.I will have been candy free (including tonight)for the entire month as well as cookie, pastry, cake, scone, and muffin free as well.
2. I will be breaking this by having a nice slab of birthday cake tomorrow night.

This doesn't mean I'm going to hell in a hand basket and falling back into my old routine. In fact I invite any of you to join me in a new challenge for November. After putting our heads together, Jen H and I came up with new one. This time you'll be ADDING to your diet instead of taking away. Simple, right????
Here's the details:

You must sign up on the google spread sheet.
You must (try) and post an update daily on the intake
The goal will be to try and consume 5 servings of either fruit or vegetable in
it's purest (or close to) form.
Example: A muffin with cranberries or a slice of banana bread doesn't count
Ice berg lettuce, cucumbers, celery don't count either. :-)
The challenge will start November 5th and end December 5th. Stay tuned for the
new google spreadsheet coming soon.
The idea is, instead of filling yourself with empty calories you will be compelled to get you daily intake of fruit and veggies which will hopefully fill you up and discourage mindless eating of M&M you will regret later!
Lastly, I want to thank all of you for you personal messages and responses concerning Margaret. It's very special to know in a world full of despair, violence and hate, people can come together and show sincere support to someone they've never even had contact with yet display genuine concern and a sense of personal connection. It's made a long sad week for me personally a bit more bearable.

Posted by Trigirlpink at Friday, October 31, 2008 14 comments
Email ThisBlogThis!Share to TwitterShare to FacebookShare to Pinterest 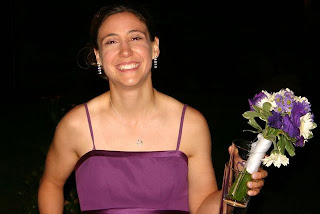 Margaret has lost her battle with brain cancer.
She died this morning, Tuesday October 28th.
She was diagnosed with a brain stem anaplastic
astrocytoma on November 15th 2007 at the age of 28.
Posted by Trigirlpink at Tuesday, October 28, 2008 24 comments
Email ThisBlogThis!Share to TwitterShare to FacebookShare to Pinterest 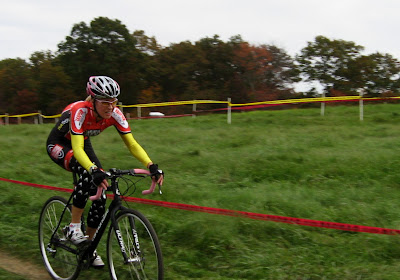 Race #2 for TGP in the wacky world of cyclocross is in the books. I get a D- for my race results this week but an A+ for my kit; don't you think??? It's the skully tights that made the grade and we all know if you suck, you can at least look good. I got blown away by a bunch of girls who know how to turn their bike zippy fast through tight turns and ride a power course in the big ring.
This weekend I captured a few fellow blog mates racing and here's the proof! Cort, Gary and Brad were in the men's 1,2,3 race while the Women's Cat 1,2,3 race featured Cathy. I did my very best in getting right in her face with quality cheering to keep her mooooovin' on the back side of the course where no one was spectating. 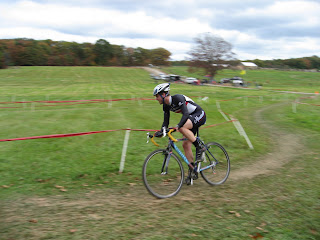 Gary- swims with his sneakers- David 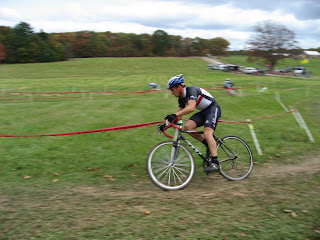 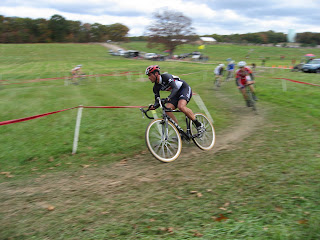 Cathy can't call me a sandbagger-Rowell 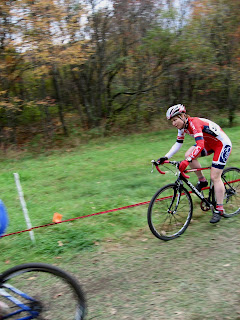 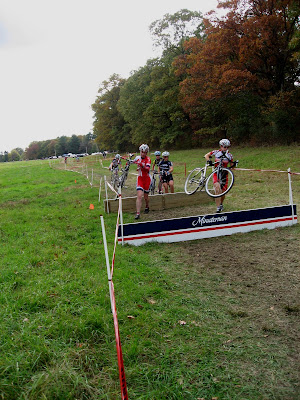 And just for kicks, let's not forget my newest TP team mate to join the cross circut along with Jay, Peter and I this week. Double D (Dave Dornus). Dave grabbed a borrowed bike and jumped in the Men's 3,4 35+ race having never done a cross race before as showcased in this photo of him looking like he is going to hurl the bike instead of carry it over the barrier. A simple fix for this Race Across America (team of 4) second place cyclist. 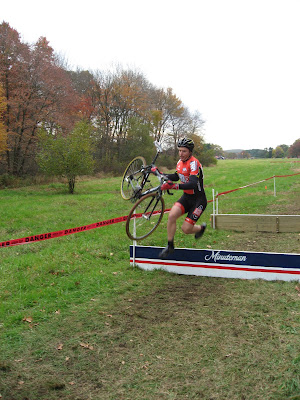 Posted by Trigirlpink at Sunday, October 26, 2008 8 comments
Email ThisBlogThis!Share to TwitterShare to FacebookShare to Pinterest 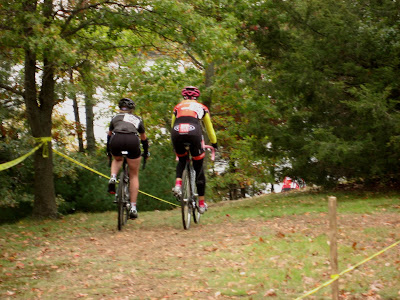 So here I am before going down this smallish imbankment with this other girl I caught
up to and what did I do?


I said........ GO AHEAD.. YOU CAN GO..... as if I was in my car and being a polite and curtious driver and letting her merge into traffic out of the Dunkin Donuts parking lot.
I think I was actually looking for *the wave* at the bottom of the hill from her for my act of kindness. Instead she beat my timid amazon azz.
Posted by Trigirlpink at Tuesday, October 21, 2008 9 comments
Email ThisBlogThis!Share to TwitterShare to FacebookShare to Pinterest 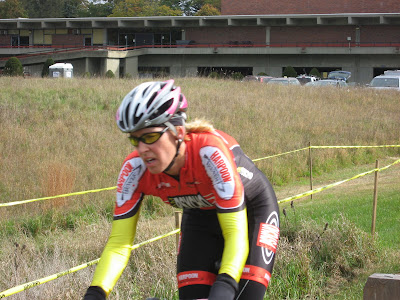 I just love this sport! I'm far from good at it but I think that's my motivation to keep at it. It's such a challenge for me and so very different from triathlon. 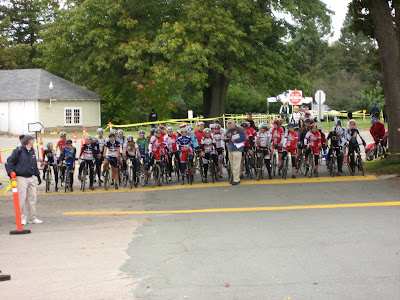 Here's yesterday's Cat 3/4 women's start. We are waiting an extra 30 seconds for the Cat 4 men to get off the ground up ahead after a huge pile of them crashed up in front of us.
See me? I'm hiding in the back! :-)


It's a late start to the season, but better than never. Sunday was my first cx race this year. I'm not sure I can actually say I raced but rather suffered the effects of a pegged HR for way over a period of time I've experienced in the minimal training I've mustered up.

I've had a tough fall this year. The after effects of a summer race season I continued to race through not 100% healthy. Not even 80% for that matter. My determination to continue to race through the summer only seemed to dig me a rather large injury hole to try and scramble out of. This fall has been weeks of functional training and healing time. It's been a slow process and disheartening at times. One day I feel great, the next my back, my foot, or some nagging tendonitis in my bicep is bugging me. I essentially made my own injury bed and now must lie in it and let time take it's course. Live and learn I guess.

It was breezy and chilly down in Canton with a rather large field of men (135) that started 1 minute before the women. I wasn't thrilled with this thinking all I wanted to try and do was not be caught by the male leaders at some point in the race in some technical section and get tossed to the ditch like an empty Red Bull can by a fire snorting aggressive dude.

All went well and I was pleasantly surprised how unfazed I was at any area of the course that last year I literally held my breath trying to tackle which proves my skills (as minimal as they are) stuck. Also this year instead of being out on the course all by myself bringing up the rear, yesterday I was bringing up the not so distant rear (ha!) and had some women around to key off of which is oh so much more fun.


The best part of the day was seeing 2 of my Team Psycho team mates out there. 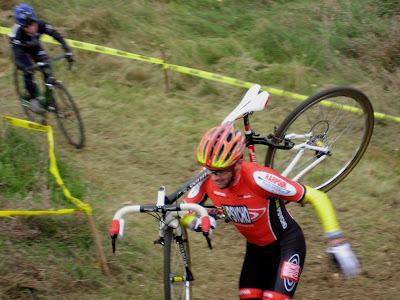 Here's Jay leading the front of the 4's. 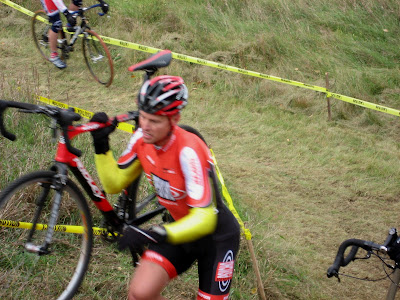 And cross prodigy Peter. First race and he's blowing the Cat 4 men out of the water. Unbelievable. He's got the engine and with some fine tuning he's be saying "bye bye" to Cat 4 racing.
results

Posted by Trigirlpink at Monday, October 20, 2008 9 comments
Email ThisBlogThis!Share to TwitterShare to FacebookShare to Pinterest

This week in review 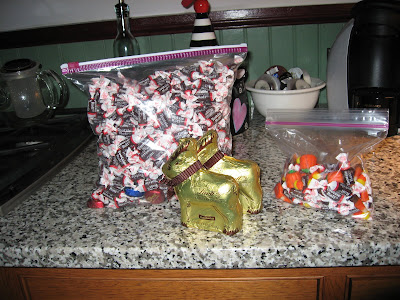 It was time to purge. The candy stash- gathered and removed from my dwelling. Look! I even found chocolate reindeer from last Christmas! Everything must go.. 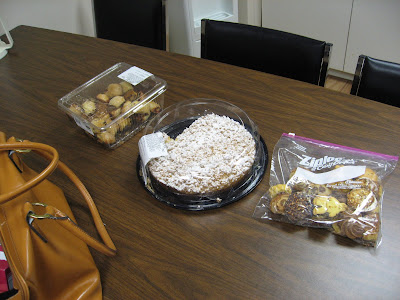 I cleansed my house of candy only to arrive at work with a nice bakery assortment staring up at me from the office kitchen table. 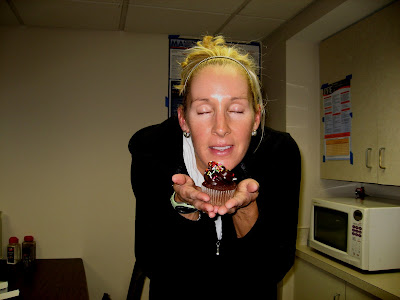 Lets not forget the dark chocolate cupcakes that replaced the above items the next day. I'm proud to say I only sniffed my cupcake and did not consume it's fluffy moist dark heaven on earth greatness. 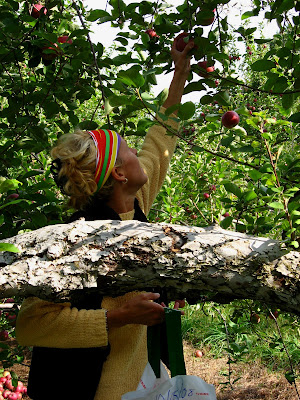 instead I just munched on those apples I picked last Sunday. 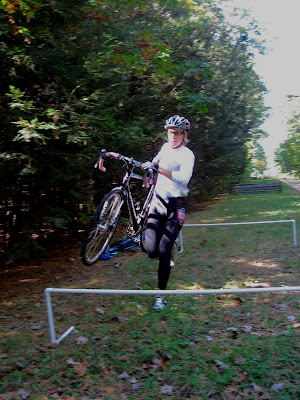 and just because I'm not eating crap doesn't give me an excuse to not keep moving so some cyclocross barrier work was in order. 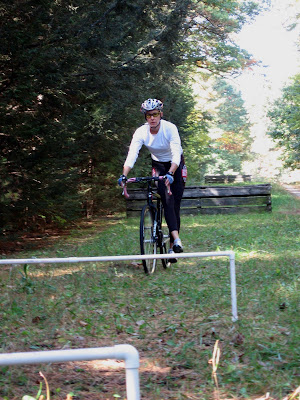 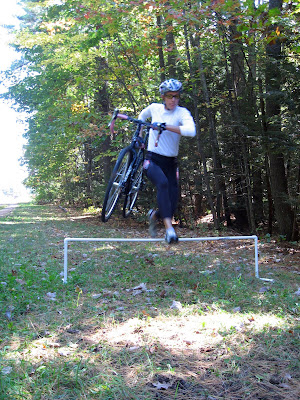 Here's to all my bad ass chicka peeps in Kona. I wish you all the best and when things get tough out there, remember how you got there. With grace, tenacity, mental toughness all in a neat little package from another race that qualified you to be there. You are the BEST in the world! Good luck and have FUN!

Posted by Trigirlpink at Friday, October 10, 2008 16 comments
Email ThisBlogThis!Share to TwitterShare to FacebookShare to Pinterest

Apples And Other Stuff! 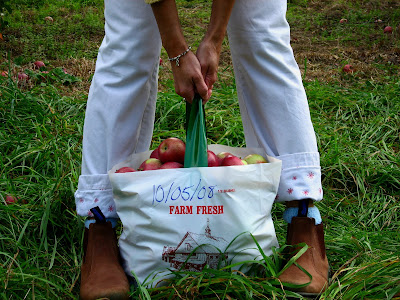 Mmmmmmmmm. nothin' like a fresh picked apple from the tree, eh? Today we chose one of 3 apple orchards that are less than 2 miles away. My pick? The one where the picking orchard
is far far away from the barn where the homemade apple turnovers and cider donuts are made. Danger Will Robinson! It's highly likely I would have caved. Why torture oneself?


The trees are FILLED and it took less than 15 minutes to fill our bag. 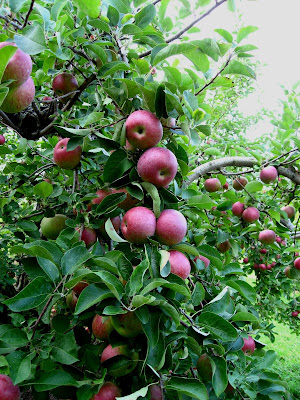 In other news, I've actually taken my cross bike down and started to do a bit of training. Next weekend is Gloucester Grand Prix in which I will not be participating but volunteering as a course marshal both Saturday and Sunday. Rumor has it that Lance will be in attendance 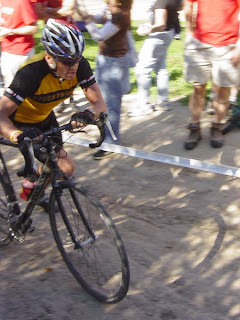 but that keeps getting squashed as he is saying "no, it's my kids birthday weekend" We'll see, it might be a effort to deflect the masses that would never consider spectating a cyclocross race in the first place.

This past Friday evening I joined in the festivities to celebrate Pro cyclocross athlete, Mo Bruno-Roy's launch party for her 2008 sponsor line up at Wheelworks . She'll be sporting a sweet combo titanium and carbon fiber Seven brand bike with Sram components. Yum. Maureen happens to be my masssage therapist as well. I've been informed i won 2 raffle prizes! Stay tuned on what I won! I have a massage on Thursday.

Posted by Trigirlpink at Sunday, October 05, 2008 13 comments
Email ThisBlogThis!Share to TwitterShare to FacebookShare to Pinterest

From Margret's boyfriend,
"We got the results of Margaret's Saturday MRI on Sunday. Unfortunately, it looks like this round of chemo simply didn't work. The tumor has grown at its primary site, and some tumor cells have also gotten into the spinal fluid--resulting to several new lesions on Margaret's meninges (the outer lining of the brain). That particular development is almost definitely responsible for Friday's seizure. The overall prognosis looks very grim than ever--the neuro oncologists are giving Margaret less than a month to live."

I'm not giving up on Margaret and neither is Margaret or her family for that matter. Miracles happen everyday and given the outlook by her team of physicans, one can just choose to give up or continue to stay postive and keep on fighting.


"Onto some more positive news. After about three and a half days of an Ativan/seizure induced stupor, Margaret finally started bouncing back yesterday. She's alert, awake, laughing at our jokes and communicating with us via the spelling board. They also finally started her TPN feed, and so she can finally get some proper nutrition, get stronger, and prove the doctors wrong once again. Hope's not dead... it's just really beat up."
Posted by Trigirlpink at Wednesday, October 01, 2008 10 comments
Email ThisBlogThis!Share to TwitterShare to FacebookShare to Pinterest