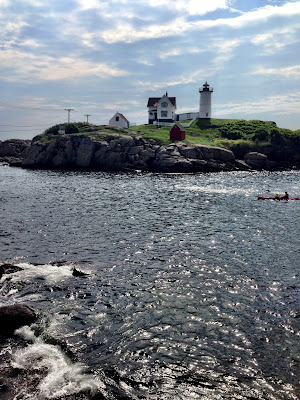 It's time to finally stop beating my head against the tile wall of the pool and swallow the bitter pill that I'm not an open water swim specialist.
There, I said it.
It pains me to confess to this because I love it and it's not like I haven't tried to think and act otherwise but the truth is,  I'm just not good at it, period. The frustrating thing about open water swimming is, it's almost impossible to point out and fix what is broken (that) what you cannot see.  In a perfect world I would have had my friend and swim guru Nate McBride a 20 year masters swim coach in a kayak next to me on Saturday with a clipboard checking off all the crap I'm doing wrong and wielding a large stick to whack me with every time I gave another second or two away.  Honestly I just can't see( myself )where the breakdown was and if  I can't visualize, digest, and work to improve a particular flaw I seem to be plagued with, I am NEVER going to fix what is broken.

This was my 3rd go at Nubble Light Challenge.  Every year it gets better. The race directors go above and beyond having safety the top priority as they should.  There are boats and kayaks throughout the entire 2.4 miles. Many more than the first year.
You cannot breath to the left or right without seeing a boat or kayak hanging out with it's occupant looking at you.
I wondered what are they thinking sitting there bobbing in the ocean swells. " That girl is swimming like she'd never
pass a sobriety test "  or "These people are nuts swimming out here"

The first year they had 4 buoys for sighting for an ocean 2.4 mile swim.  How I even got through that swim with only 4 buoys  frankly is beyond my comprehension.  It's apparent that I suck at slighting and swimming  anything that resembles a straight line so with only 4 instead of the now 10, it's a miracle I didn't  either get plucked from
the mid atlantic or run into the rocks that line the Nubble Light House back in 2010.

Back to Saturday.  Everything was status quo except the tide was in and WAY IN.  Whoopsy..  I thought....more water to swim in.  This ain't gonna be a record breaker.

My wave went off without a hitch except one:  The timing company that was used handed out
chip straps that were  like threads, over stretched and the velcro was all but gone.  I Finally got the
thing situated on my ankle and it felt secure (as it was gonna be)
Not even to the first buoy, the thing was dangling from my big toe. Granite State Timing should be
grateful  it didn't end up on the ocean floor. I snatched it and hung there treading water for a minute wondering
what I should do with the thing.  I ended up stuffing it under the leg of my wetsuit and off I went.
My swim was good (or so I thought).  I swam it a bit conservatively at the start getting out of the waves
and not going hypoxic like I have in the past, gasping for air. I settled into what  appeared a good pace swimming my own race and not concerned with finding any feet to jump on. There just wasn't any in my small-ish wave.

Were there swells? Yes. Was the water cold? Only in spots. Did I feel good?  Yes.
No excuses.  I just sucked and sucked BAD.
A particular individual  that I can pulverize in the pool  exited the water in another wave, 5+ minutes ahead of me. Five minutes in the swimming world is like a week. Just sayin'
When I looked at the results compared to how I felt I did, my jaw went slack.  1:18 and 14th IN MY AGE GROUP.
Huh?

Numbers don't lie and the Garmin 910 I wore confirmed my lackluster result. 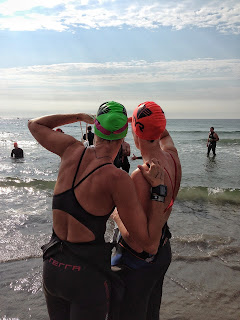 I didn't leave without a nice parting gift. The worst chaffing from a wetsuit I have ever had. 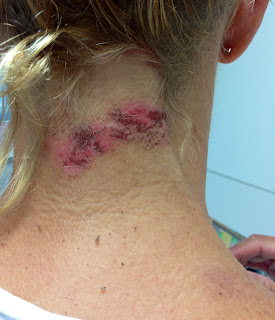 I know what your asking and YES! I slathered on BodyGlide pre swim.

Posted by Trigirlpink at Thursday, July 25, 2013 2 comments
Email ThisBlogThis!Share to TwitterShare to FacebookShare to Pinterest

Bikes, Swimming and LESS of me!!

July is upon us and I'm settled into a good summer routine.  My knee is 99.9% feeling fabulous and I've even started to run.  The 151 lbs I weighed in January is now down to 140-139. It's been a looooong tenacious road in this department. My hummingbird metabolism is all but a memory and it's been tedious getting back to where I can wear my normal clothes. The biggest PITA now is being forced to wear this carbon brace when I mountain bike, trail run or ride my cross bike in the trails. Anything risky that may force me to twist and snap my graft. (shutter) Are you wondering if I'm miffed that It wasn't offered in pink?  You bet.  For $1000????  The good news is I don't have to wear it past my anniversary/surgery date of Oct 10th and then and only then, can I have a ceremonial toss to a landfill. 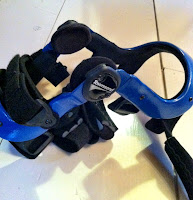 So yeah, I got a  mountain bike and here it is for the 2 or 3 of you that missed the social media image overload I made you endure. It's supa nice as you can imagine. Nothing that comes out of Seven Cycles is anything but. I waited foreverandaday for this bike but now that it's in my grips, it's just an amazing bike and honestly, it is way too much bike for the noob mountain biker that I am. I am forever grateful to Rob Vandermark, Patria Lanfranchi and everyone over at Seven Cycles who had a part in making this bike for me, 'specially Mikey Salvatore who hinted I should ask for a pink bike. I've taken 2 clinics and doing my best trying to get out on it as much as I can to (try) and master some of the basics of mountain biking. It can only make my cyclocross skills a smidgen better, right?

Remember that paddle board lying unpacked screaming to be taken out 2 posts ago?  Finally, It went on it's maiden voyage Fourth of July weekend by me. Gripping the deck with my toes, I got right up on that sucker and never fell off!  Another toy I didn't know squat about but have fallen in love with. You wanna get your back, abs and arms rock solid? SUP. It's fun and relaxing yet you are working out  by trying to keep yourself stabilized on the board while fish gazing and working on your tan! 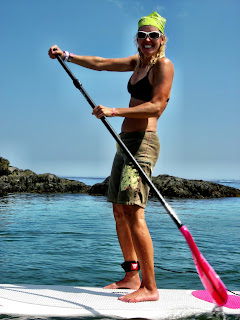 In other news, The Nubble Light Challenge is less than 5 days away and I've been working hard to prepare for the distance along with the temperatures the unpredictable Maine waters can toss at you.
My friend Elaine Howley, an experienced English Channel swimmer has been dragging me out to open water swim with her in Nahant and South Boston.  I even managed to sneak in a 5k swim down in Mashpee for training. It was held in a pond but it was more like an ocean and I loved every second of it.  I even got FIRST in my age group!!  Ok.. I was the only woman in my age group there. Humpf! What the heck?? I guess they all slept in because it was windy and raining. 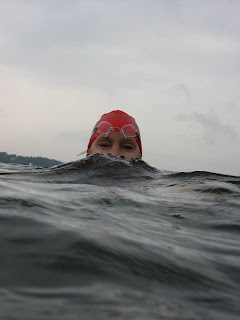 Ok, so wish me luck this weekend!! My plan is to stick to Elaine like those crotch protectors in new
swimwear.  She won't be wearing a wetsuit ( way tougher than I) but she's a pro at navigation and a purest in
the open water.

Thanks for checking in!

Posted by Trigirlpink at Monday, July 15, 2013 2 comments
Email ThisBlogThis!Share to TwitterShare to FacebookShare to Pinterest