It's time for another 10 Questions with TGP. This time it's All Things cycling with one of the premiere race announcers in the US. If you own a bike, then you should know Richard Fries!

Click on the 10 questions link at the top of this page to gain some thoughtful insight on the King
of all Cycling media!
Posted by Trigirlpink at Monday, February 27, 2012 0 comments
Email ThisBlogThis!Share to TwitterShare to FacebookShare to Pinterest

The Annual Team Psycho Time Trial. We Do This For Fun???

Time for an update.
Here this blog will sit, dormant until I feel inspired to write something and well, uninspired I've been. The months of January/February are tough ones to find  the mojo and spice to write something that won't make your eyes glaze over. For example, like swimming for a straight hour for the 2012 USMS Speedo January One Hour Postal swim?  In a nutshell, It's like watching paint dry on the bottom of a pool  but at the end of that wondrous  hour, it feels like you've been holding  a nice thick 1970's encyclopedia Britannica  in each hand (arms out straight)  pretending to be the letter 'T'  for that hour.
Did it.
It's over with and that's all I'll say about that. 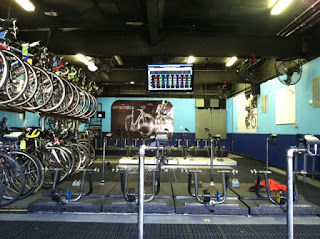 Another  fun (and even more self inflicting torturous) event to stir up the copacetic winter transpired last weekend. That being The Team Psycho Annual Indoor Time Trial held at FastSplits in Newton MA.  FastSplits  boasts a state of the art 16 capacity Computrainer ride studio with 2 - 42 inch flat screen monitors, mounted fans and a great  sound system all to distract you from your 15k of self flagellation. Fun!

I was hoping my 13 race season of cyclocross would give me a tad advantage if only
that I am conditioned to sustain the discomfort one experiences in both of these situations.

After a little bit of time off the bike I started back up with some "cyclocross" specific  pain toleration workouts to prepare.  One word: Dreadful....
I know power is the key to cycling workouts and your heart rate is only
a result of the given work but I pay close attention to it and I know my limit before I venture to the dark side and come undone or so I thought I did.....

Too bad there isn't a special award for the highest heart rate for last weekend's time trial effort 'cause I'm pretty damn sure I'd nab top 3  or at least get the parting gift of a years supply of Swifter refills because I saw numbers I'd never seen before.  How 'bout 191?  When at home staring into the abyss pedaling to nowhere on my own computrainer, if my heart rate goes OVER 184 during a hard fixed wattage interval, it's curtain call after 10 minutes max.  During a cyclocross race of 45-49 minutes, my HR can fluctuate but hovers around 186-187.  Ain't no one's gonna tell this girl she's a slacker and doesn't push it to the limit. I might be bringing up the rear but I'm working  back there and DEARLY. 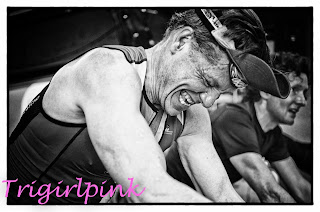 Lucky for me, I was the only one toting around a fancy camera for the day on Saturday so of course I took full advantage of  shoving my lens  in  faces contoured in pain and thoroughly enjoying watching others suffer. Since I was the official unofficial TP  foto taker, I can't actually prove  there reeeeally were black and white twirling spirals in my own eyes and sparks flying off my over processed split ends during my bit of fun but trust me, it happened.

It's all but a memory now and I'm fairly content with my result. I didn't go out too
hard worried I'd hit that 184 mark way too soon. LIttle did I know 184 would be the least of my worries.  SOME ONE CALL 911!

Thanks for stopping by! 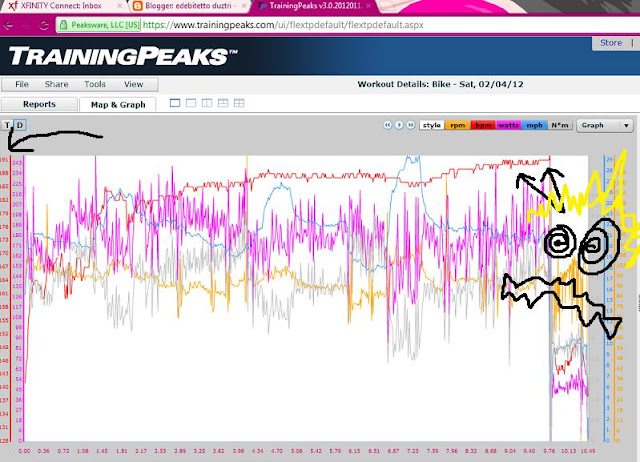 Posted by Trigirlpink at Thursday, February 09, 2012 2 comments
Email ThisBlogThis!Share to TwitterShare to FacebookShare to Pinterest