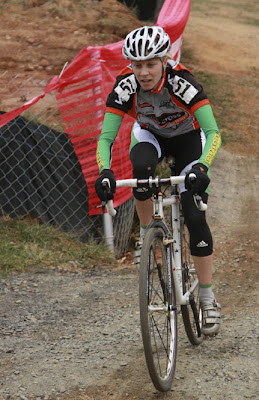 Bruno Roy became the third woman to sweep both halves of Verge MAC's three weekend doubleheaders. Kerry Barnholt swept both the Granogue and Wissahickon races in October, and Georgia Gould swept both days of the New Jersey weekend in November. But Bruno Roy, fresh off her World Cup debut and another seventh place finish in France, not only swept the final weekend, but scored highly in all six races against the best in American cyclocross to win the Verge MAC title.

Posted by Trigirlpink at Saturday, December 08, 2007
Email ThisBlogThis!Share to TwitterShare to FacebookShare to Pinterest