The Quest For The Polka Dot Jersey


Confession:  A climber I am not.

It's a TGP factoid. My Limiter. The weak link.  Nevertheless, this hasn't discouraged me one bit from trying to be a better one in the 15 years I've been cycling.  When the topic comes up in conversation I often hear: " just spin up the hill in an easy gear"  Ha! If it were just that simple.   You see,  I don't have an "easiest" gear when I climb. I don't care what gear ratio you offer up,  It's simply this: One gear Sally all the way up on the inside of that  cassette yet still looking for one more cog. Riders are usually passing me sprightly spinning and in control chit chatting with someone next to them while  I'm over on the right, head down, gasping while burning the always seemingly (too few) matches I've been hoarding.

This is not to say that when I am  fit,  I'm certainly more in control but only in the sense that I can recover quickly and can take the quad chewing/match burning for much longer.

It is what it is yet it has never influenced my decision of a given training ride or even a race selection for that matter.  In fact, I head for the hills every chance I can get always reminding myself that consistently yields results if ever so minimal.
My first long distance triathlon was Long Course Worlds in Nice France. Let's just say there was a bit of climbing. Hills?  Mountains.  It was a treeless moonscape at the top/turnaround.  I had no idea what I was getting myself into and at best, I was ill prepared for how technical the course presented. ( I didn't get the memo) I was just super excited to travel to France representing USAT as an age grouper.

When I chose my first ironman, it was  solely based on ease of travel to the venue with no thought it how the course suited me based on my abilities. Ironman Lake Placid is far from flat and if you don't  reel it in on the first loop of the 56 miles you pay dearly on the second loop with a 26.2 run with it's own share of hills tossed at you.  (I got the memo but I didn't read the memo)

Let's fast forward. This weekend I'm doing the Battenkill Gran Fondo. I didn't even know what Battenkill was until last year. Clearly I'm not racing( I got the memo) and the sole purpose is for it to be a fun day on a beautiful course with some new cycling friends who talked me into it. No doubt my quads will be chewed up after sixty something miles on a  a mix of gravel and paved road surfaces featuring some climbing I'm too scared to go look at.  (what you don't know, won't hurt you-ignore the memo technique)

I followed the same pattern a few weekends ago at the Overland Adventure Maple Ride in VT. Silly me... Focusing on the sugar house stops planned during the ride with treats waiting for us was WAY more important than glancing at the elevation and grade of the some of the climbs beforehand.  ooof..... The relentless climbs combined with some very chilly temps and funky road conditions left me trashed and wondering what was I thinking after the mere 35 mile "adventure"

One thing for certain this weekend, I'll be coming home with chewed up quads, the chronic never-good-enough- gear-ratio,  hoarding my matches the best I can while facing one climb at a time in my make believe polka dot jersey. 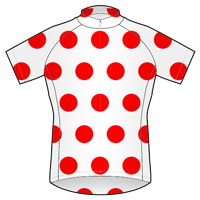 Thanks for stopping by!

Posted by Trigirlpink at Friday, April 04, 2014
Email ThisBlogThis!Share to TwitterShare to FacebookShare to Pinterest