I'm quite sure I  heard  the ocean say this to me  as I stood peering into the thick fog on Long Sands Beach in York Maine looking for at least one orange buoy as promised or at least the outline of  the Nubble Light House I would  be aiming for.  As the morning minutes ticked away to race time, the fog gently dissipated with the forecast of rain nowhere in sight. The sun was out, the beach was warm and  breezy. A perfect summer morning.


I decided to wear my sleeveless wetsuit having gotten a reading of 62 degrees just a day before the race via the race staff. I have a long sleeve  Blue Seventy wetsuit, but I've never really felt comfortable in it besides the fact it's a workout in itself getting the damn thing on. Could it have to do with my*100 pounds of athlete, 40 pounds of a$$ meat frame* I'm sporting these days?
Perhaps.


I do miss my old Orca  wetsuit that had some sort of material lining the  inside that was a breeze to pull on. I had ordered a new Xterra full suit but it didn't arrive in time. RATS!


That was a mistake. ( the wetsuit choice)


Had I taken the ocean seriously I would have been better prepared for the battle it was about to throw my way.  A full suit, 2 swim caps and maybe even those fun little BlueSeventy  swim sox just sitting home collecting dust would have been (better) battle protection.


Lets get to the shark meat of it.   the shortest distance between two points is a straight line


The water was cold but not burn-your-face-cold.  62. Doable for sure.  I did not
stick a toe in the water pre race.  I figured I had 2.4 miles to get some sort of warm up in. No sense getting my panties in a bunch and shivering on the shoreline waiting my impending frolic right?


I stood on the beach, primed and ready. I wasn't thinking about if or how I would tolerate the conditions I might encounter.  I would take them as they presented themselves.   I had a kayak escort that was at first,  a requirement for each swimmer but then as the race approached, the rules changed, it became an option. If you could submit results of a one mile swim under 30 minutes this could be waived.  Pfffffffff. No problem-o but I kept  my security blanket kayak guy, Rick from Kittery Point. Being it  the first inaugural event, and not knowing really how things would go down out there I made the right decision as you will soon learn.  the shortest distance between two points is a straight line 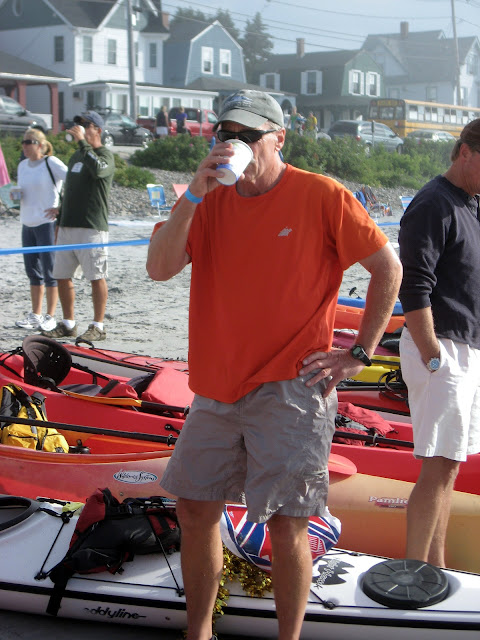 I hugged my right hand man and PSB (potential shark basher) Rick and sent him off for final preparations. I would see him 300 yards off shore in Wave 2 - Red caps.   I "Be-Dazzled" my swim cap with waterproof silvery duct tape i found at Home Depot so Rick could pick me out. Now that  I think about it, he only had to look for the bubble headed bottle blond that was dumb enough to have her stick arms exposed.

swimming through the "gut" 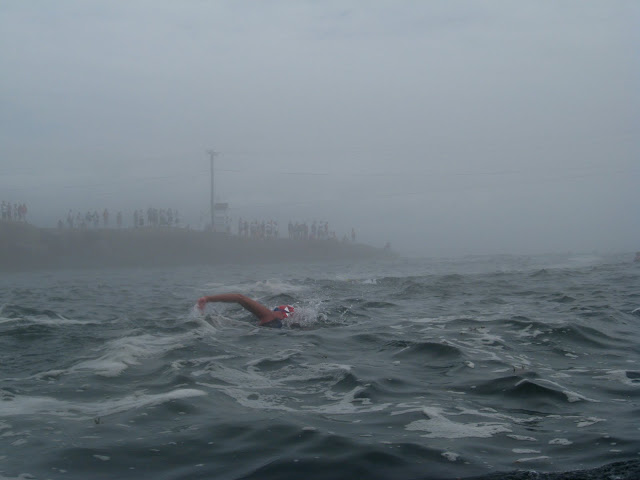 Oh.. I Be-Dazzled Rick too with gold garland and a Red Sox flag for his vessel so my family on shore could see him at the middle check point- a narrow channel  or "The Gut" which brought us from Longs Sands beach over to Shorts Sands beach with a quintessential Maine rocky coast line, the light house looming above,  and a smattering of lobsta traps, to brush by.


5,4,3,2,1  and my wave was off.  I tumbled through the waves and decided dunking under the surf line was the easiest way to get out past it. Success.
With a few re-adjustments of my goggles I was in a good groove and suddenly found myself not concerned with the water temperature one bit.   Cool.......
see my foot? 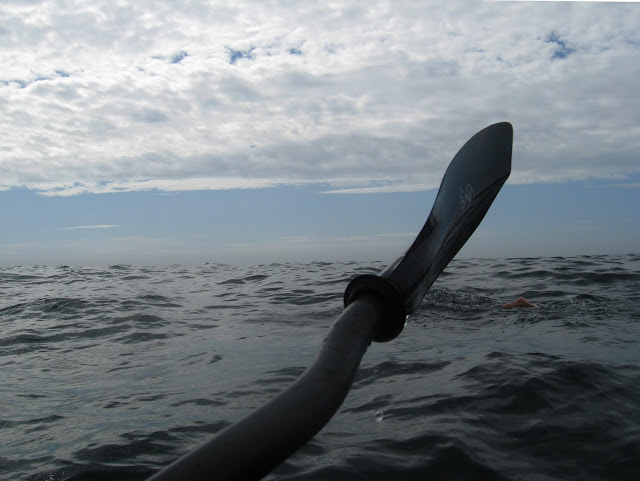 Within 10 minutes Rick was paddling by my side. I was excited! Off we go!! I'm NAILING THIS SUCKER...   the shortest distance between two points is a straight line


I was cruising along trying to stick with my friend and WestSide Swim Club coach Nate McBride's suggested sighting/stroke pattern  8/10/18  he had given me. The more swimming, the less slighting, the less lag.
All was going well until the ocean decided to mix things up a bit and see how all 100 of us were gonna handle a few wallops of the most fridge water I've ever experienced. It was as if someone opened up the antarctic flood gates because suddenly I was short  of breath trying to acclimate to cold water yet I was already in cold water!  I gathered myself ( having to breath every stroke for a bit) and PRAYED that this was just a mini pocket from a current and all would be fine.   the shortest distance between two points is a straight line


Almost to the Light house (about 1/2 hour in) My Kayak guy Rick started blowing his whistle.
"Dear mother of Jesus.. does he see a shark or something???"  I pop up and whip around only
to hear  him yelling he is helping out another swimmer in distress.


Mommy....  I'm scared....
"Pull yourself together!!!!" and so i did (well sort of)the shortest distance between two points is a straight line


I'll cut to the chase.  The water DID warm up but only in small sections and not enough to make
me feel all warm and fuzzy inside. Instead, my head started to feel like it contained a large amount
of helium and my praying mantis arms began to feel like dead tree sticks with a garden claw on the end.
(think scarecrow)


I exited the midway point to head for home and decided (in a helium head kind of way) going OUT to the right instead of hugging the coastline was a far better option. (for hypothermia) 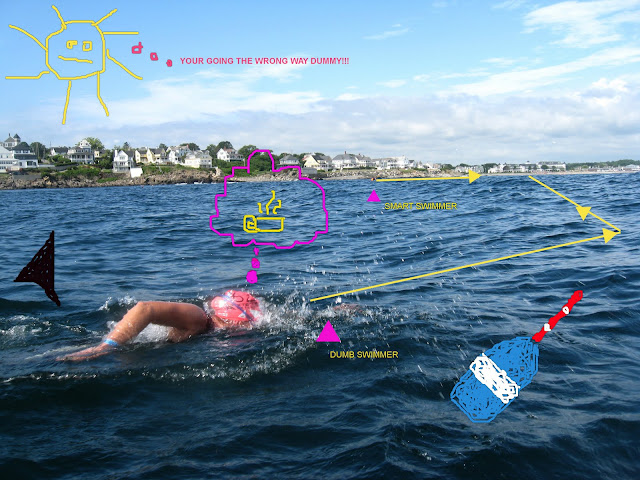 Now if I was smart, I would have explained to my kayak escort, " I have a little problem. I tend to zig and then zag when I open water swim. FEEL FREE to whack me with one of your paddles if
I go wandering like Lindsay Lohan searching for her fallen cell phone under the table after her third  bottle of Kurg.
You get my point.


Hummmmm... silly me for leaving out that minor little detail on the pre-swim pep talk.

FINALLY I hit the shore line and climbed out of the water on my frozen stumps but not without
falling back into the water a few times while everyone watched.  Lovely!


15-20 minutes of some much needed  attention, I was good as gold and contemplating a re-match
with that ocean next year but not without:


A full wetsuit
At least 2 (short) cold water swims
My cozy BlueSeventy  sox
and either 2 swim caps or a thermal cap (so very fashionable..not)
oh... and how can I leave out the most important task to learn?

the shortest distance between two points is a straight line 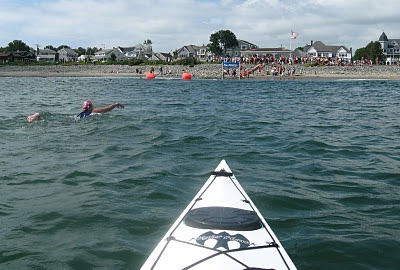 Posted by Trigirlpink at Wednesday, July 14, 2010
Email ThisBlogThis!Share to TwitterShare to FacebookShare to Pinterest

I love the photo drawings.

Great job! Brrr. I got cold just reading it. I would have gone bat sh*t if my kayaker started blowing his whistle. Whistle + open water = sharks.

Are there a lot of open water races out there? What a fun non-triathlon event!

Nice race TGP. COLD, but glad to see you didn't have any limbs chomped off by stray sharks.

Whistles freak me out too. I was a lifeguard in HS and and college and hearing a whistle near water still makes my heart jump and my adrenaline start pumping.

Brrrrr... That is a cold ocean! You might want to come to hawaii and do one of our ocean swims. Much more pleasant, especially in the summer. :)

i still can't believe you did that in a sleeveless.....that is COLD.
i have the same problem with my wetsuit - unless i'm wearing tri-shorts, it just kind of gets stuck on my thighs and takes an hour for me to inch it up....then comes the zipping part where i have to figure out how to pack my boobs in.....

I love your duct taped head. hahaha. I thought about shark bait for a minute, like the spoons we used to fish with. Note to self for next year.

And Brr, is right. I would have worn that LS and about 3 caps!

Good for you, super cool and great artwork too:)

You are a riot! That looks like an awesome event. Albeit likely cold as sh*t. You're a stud for doing it! I love open water swimming like that; esp when you are done after only a swim. 5k open water swim races are fun. :)

you are cracking me up girlfriend. This was epic! I love it. Your picture with the little drawings had me howling. Did you really put a shark in there? How can you even mess around like that? I don't even "think" about sharks when I swim because I'm afraid it will attract them!

Love the line drawings on your picture! It's 100 degress outside but I'm cold just reading your rr. Great job!!!