Must haves for proper triathlon spectating

Lets start with the simple cow bell. Your voice will thank you later. Surrounding spectating neighbors might not like this but to flippin' bad, right? And I'm not talking one of those itty bitty jingle bell types they hand out for free.I'm talkin'
the really big ones you have to BUY.
Your athlete will appreciate it. Plus they'll hear it at least a mile away and know it's you ringin because you'll be the only one with the balls to actually ring the sucker and it will give your athlete a chance to compose themselves and muster up a jog instead of the death march they are doing at the moment back there in *the bad place*. 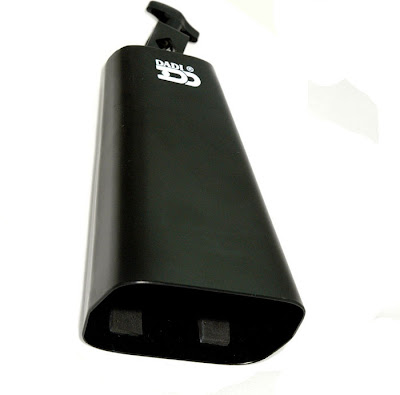 You will look SHARP toting one of these around. Trust me on this one. The BB Gun or otherwise known as *The Motivator* will save your voice and you can put down that cowbell when your wrist becomes sore and your own ears are ringing without the bell. One shot of this in the ass of your athlete and he or she will be well on their way for that PR run! A pop in the shoulder if you catch them on the bike course is simply to remind them why they spent $900 on those carbon aerobars up front and to stop sitting up like they are pedaling a beach cruiser on the Venice Beach bike path. 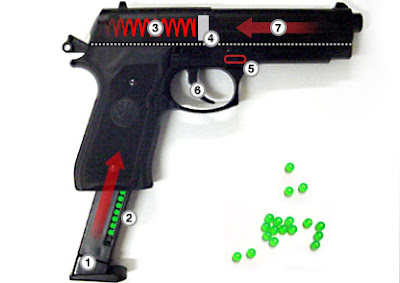 Now I hate to sound ungrateful here but sometimes "Your lookin' good!" or " Almost there!" gets old and quite frankly, doesn't have a lot of thought behind it. Carry this along with you for quick reference when you become stumped as to what to say to your athlete as they pass by. A few choice obscenities are quite acceptable but you don't want to sound like a dirty truck driver all day so you should alternate your comments based on how your athlete looks at that particular moment. For example:
Calling them a sorry looking sonofabitch might be a bit much if your athlete is on
the verge of tears. Use your best judgement!

I don't want to seem completely selfish here and your comfort is of utmost concern so one of these might be an option before your legs become throbbing tree trunks standing in the blazing heat or pouring rain. The little sucker folds right up for carting around the course too! So clever. 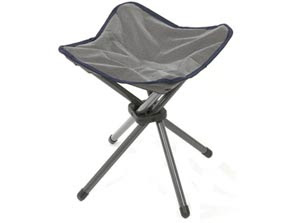 Speaking of folding gizmos, isn't this convenient?? A folding stretcher!!! Think of the praise you will get if you happen to see (god forbid) an athlete down for the count. If the BB gun doesn't get a response, the fat lady sang. 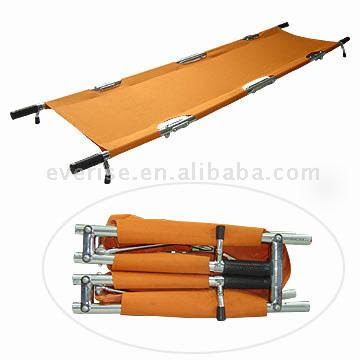 Posted by Trigirlpink at Wednesday, September 03, 2008
Email ThisBlogThis!Share to TwitterShare to FacebookShare to Pinterest

lol...i feel this is a post meant for me! i need to find one of those 'motivators'! i figure that anyone is fair game. i actually could use one of those on a daily basis around the house for a certain someone if you kwim ;)

LOL at the motivator.. I wonder if I could run faster if someone just chased me with a gun?

rr,
I'd love to be the one chasing you with a gun, but you're still faster than me without one! And the weekend of Kona, I'll be doing my last pre-imfl century ride on the beautiful (and flat) eastern shore of VA.
Thanks for the sherpa/spectator tips. I think I'll go buy my husband the collapsible stretcher right now so he'll know how to use it in 8 weeks.

PS: Whenever I hear a cowbell during a race, I always need to shout, "MORE COWBELL!!!!!!"

I've finally acquired a real cowbell, and I hope to use it this weekend in Wisconsin.

Of course 'the motivator' would be fun ;-)

Anonymous said...
This comment has been removed by a blog administrator.
September 4, 2008 at 4:48 AM

Haha. That is funny.

I always thought that spectators should have those mega supersoakers stocked full of gatorade too.

Hilarious and JUST what I needed now that I am an "official" cheerleader for Kona... thanks for the list!

I think the GUN is a classic one. NIICEEEE E! :) Jen H. haha

This made me nearly spew coffee on the computer. Great! Cowbells? Fun for the first 5 minutes. And if you're the one ringing it... but for your neighbors? Not so much. Good thing you included the beebee gun. To ward off attacks from those individuals gone crazy by the never-ending ring of the cowbell. :)